B
The Astraea Familia (アストレア・ファミリア) was an exploration type Familia led by Astraea until most of their members were murdered. Currently the Familia has started over again out of Orario.

The Astraea Familia was an exploration type Familia that also acted as Orario's police force, dealing with people who were causing trouble. They were apparently well liked by the people as people like Karen Claes wish that they were still active. Despite being unable to recover their bodies, Ryuu created a grave on the 18th floor, a place where her fellow members had joked that they wanted to be buried.

The Astraea Familia was considered to be a strong Familia. All eleven members were second class adventurers, comprised of two Level 3s and nine Level 4s, they had reached the 41st Floor in the dungeon. They had killed Monster Rexes a total of 21 times with most of them being Goliaths. They worked with other factions to defeat Udaeus once.[1] The Familia used to live in a home in southwestern Orario called the Stardust Garden (星屑の庭). It consisted only of female adventurers.

All members other than Ryuu Lion were thought to have been killed in a trap set by Evilus, though it was later revealed that the Juggernaut was the actual cause of their deaths when it was unintentionally summoned by the excessive damage caused to the dungeon. Currently the Familia seems to have started over again, having Cecil as a new member. 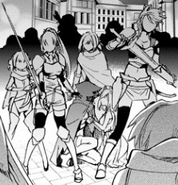