DanMachi Infinite Combate (ダンまち インフィニト・コンバーテ) is an upcoming game being developed for PS Vita and PS4 by 5pb.Games. It was scheduled to be released March 29, 2018, but was later postponed until summer, though it was postponed a second time to December 31, 2018, and a third time to 2019. It was then announced to be released Spring 2019 before it was later announced to be released on November 28, 2019, and will include a Switch and PC release in addition to the original two consoles. It's planned to released at Q1 2020 (January - March 2020) for Western. 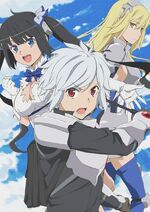 The story will be separated into chapters, and depending on the chapter, players will be able to switch between Bell and Ais' viewpoints. After the player finishes the game, they will be able to play through a total of six extra dungeons that are automatically generated, differentiated by different elements. Also, as the game progresses, they will be able to raise intimacy, which unlocks date events with certain female characters such as Hestia and Ais Wallenstein.

The game will have two types of quests: story and sub. The former moves the story along while the latter provides rewards. The player receives both quests at the Guild, and at the blacksmith, the player will be strengthen weapons and armor with items they find. The player will be able to take two characters with them to act as supporters. These supporters will be from the same Familia, but as the story progresses, they will be able to take members of other Familia with them.

Instead of levels, characters will have battle grades to more fully enjoy a character's growth, as players would only be able to reach Level 2 with a level system. Skills can be unlocked through a skill sheet that uses excilia gained in the dungeon or skill points. As skills can only be unlocked sequentially, players will be able to customize their characters in different ways, such as making them specialize in physical combat or magic. Supporters have a battle gauge that is filled by attacking enemies with Bell or Ais, which allows them to help during combat.

The theme song for the game will be Treasure sung by Iguchi Yuuka.

Add a photo to this gallery
Retrieved from "https://danmachi.fandom.com/wiki/DanMachi_Infinite_Combate?oldid=102648"
Community content is available under CC-BY-SA unless otherwise noted.