DanMachi Orario Rhapsodia (ダンまち オラリオ・ラプソディア) was a PC browser game created and operated by Gree that was released on Yahoo! Japan. After a month delay, it was released on November 21, 2017. The service ended on May 15, 2019.

The player will play as a God and start a Familia, gathering children to explore the dungeon, with Emma Flores as their first Familia member. The game will be completely supervised by the author, Oomori Fujino, and it's stated that the game will have more than 700 episodes of content. Emma is the only voiced character in the game.

From the main screen, players can access a variety of options through the buttons at the top and right hand side of the screen.

There are four different types of quest: daily, weekly, achievements, and beginner, with a number of quests for each category. Each quest can be cleared by fulfilling a certain requirement and rewards the player with items or valis.

Players have an AP gauge that decreases when starting a story stage or quest and are able to restore lost AP points by using items or levelling up. Story stages consist of a small map which players have the leaders of their parties (maximum of 3, though certain stages have restrictions) walk through, comprised of normal spaces, trap spaces, recovery spaces, item gathering points, enemy encounters, and an end of level flag. Walking allows players to move one space at a time while running covers two spaces.

There are two types of enemy icons: white normal and red boss ones, though the latter only appears on the last stage of a set. Upon entering combat, the player's party status is shown on the left while the enemy status is shown on the right, with options shown at the bottom. In addition to an HP bar, enemies also have a break bar that causes them to stop attacking for a certain period of time if depleted.

The bottom selection consists of the attack, action, enhance, assist, item, two supporter, and the Link Assault button. Players can check the combat order with the bar above the buttons at the bottom. All characters that attack after the first character deal more damage and up the combo counter until it is reset when the enemies attack. The action and enhance button effects are different for each character as they are dependant on the card set, the assist button uses the skill of one of the assist characters set with the party, and the item button allows the player to use a variety of items to heal their party or damage their enemies. The player is also able to set two supporters which can help with their skills, such as damaging all enemies. The Link Assault button allows the player to do an all out attack with all party members and is charged by attacking. 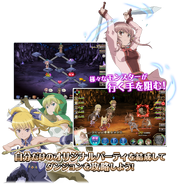 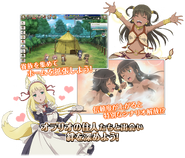 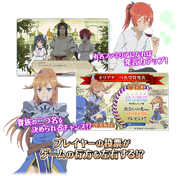 Add a photo to this gallery

Retrieved from "https://danmachi.fandom.com/wiki/DanMachi_Orario_Rhapsodia?oldid=116679"
Community content is available under CC-BY-SA unless otherwise noted.