Exploration
The Loki Familia (ロキ・ファミリア) is an exploration type Familia that is led by Loki.

The familia specializes in teamwork, allowing them to exploit their individual abilities to the fullest. Thanks to their vast strength, their members are able to experience a stable and complete growth, as high members often help the others to become stronger. However, despite their remarkable coordination as a group, the familia suffers from a common weakness in their method, which is that, if they are separated, their combat capacity is reduced. Lower-ranking members also tend to rely on the executives and, while they receive their support, there is a large gap in power and skill between the executives and the rest of the members.

As a faction focused on dungeon exploration, the Loki Familia regularly goes on expeditions. They recently became the record holders for going the deepest out of all the current factions, having reached the 59th Floor. On the other hand, they maintain relationships with several other familias and often accept quests on their expeditions.

Due to Loki's womanizing nature, all of the women in the Familia are extremely beautiful and the proportion of women far exceeds that of men.

Taking advantage of the characteristics of Riveria's Alf Regina skill, Loki created an unit composed only of Elves with Riveria in the center. The squad is made up of eleven Elves, who are all mages or magic swordsmen that have mastered concurrent chanting and trained to fight in high-speed combat, being able to skillfully use short chants. Even within the Loki Familia itself, its members stand out for their great ability as they are all Level 3 or higher.

The group is unofficially known as Fairy Force (), as although Loki tried to give it said name, Riveria rejected it due to not liking decorations. However, the name was liked by the members of the group, who refer to themselves with it in secret. Among those who make it up are Lefiya, Alicia and Sonia.

The Loki Familia home is known as the Twilight Manor (の). The Twilight Manor is described to be huge structure built on a small area of land. Multiple tall towers overlap and support each other, with the middle tower being the tallest. The home is also described as being carved out from flames.

The Loki Familia emblem is the image of a trickster. The symbol used on the falna is a variation of the emblem. 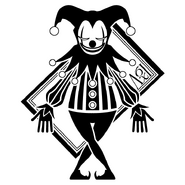 The Twilight Manor at night