Melissa Pritchett
Riveria Ljos Alf (リヴェリア・リヨス・アールヴ) is the daughter of Larfal Ljos Alf and the vice-captain of the Loki Familia.

Riveria is tall with jade-colored hair tied in a tail that reaches to her waist, same color eyes, and Elf ears. She wears a green outfit with yellow borders, a white cloak over it, a black belt, a yellow sash, black leggings, and long brown boots. She is described to be exceptionally beautiful, stated to be more beautiful than a number of Goddesses.

Riveria has a serious personality. She is one of the only people that didn't laugh at Bell and condemned the others for laughing at him. She is also a strict mentor to the lower leveled members of her Familia, training Lefiya in her studies as a mage and Ais when she was a child.

She is calm and collected during the heat of battle, dealing with unexpected events in a leader-like fashion, as shown in the event of the Loki Familia being attacked by large numbers of Virga on the 50th floor. Despite this, Riveria is kind to others, especially to her fellow Loki Familia members, earning her the nickname of mama from Loki.

Riveria hates to be called an "old woman" as she punished a 7-year-old Ais, who called her so, by tying adamantite to her and throwing her in water, calling it "swimming training". This later became a traumatic experience for Ais.

Riveria was born in the Alf's Royal Forest as a member of the High Elf family. She lived there for 71 years until she grew tired of her father's negative attitude toward her interest in the outside world and decided to leave. She left the forest with her childhood friend and former personal chamberlain Aina with the help of Finn and Loki.

She is also a friend of Njord, as he took care of them before the early Loki Familia entered Orario.

Concurrent Chanting (並行詠唱): A high-level technique involving casting magic while fighting or moving around. Its difficulty is likened to dealing with a bomb with both hands while fighting due to the chance of failing a chant or not being able to control their own magic power. Skill at using concurrent chanting depends on how much experience the user has with it, as Lefiya observed that Ryuu was far more skilled at it than Riveria.

Horseback Chanting (馬上詠唱): A technique used by the Elven knights in Alf's Royal Forest. They leave tracking and evading up to their horses while they chant, making it similar to concurrent chanting.

Chant Connection (詠唱連結): A technique that only Riveria is able to use. Chant connection enables her to change the strength of her magic based on the chant length and mind usage. Through this, she is able to use nine magics, which is the source of her alias Nine Hell, though she is able to use them separately as well. Her magic is separated into three groups of three magic based on the type and chant length, with each magic in a group referred to as a level, such as Wynn Fimbulvetr being the first level of Vas Windheim.

Flare Burn (フレア・バーン): Magic developed by the Elves for use without a falna. It requires the user to undergo training and rituals and use a long chant systematized during ancient times. It has more than twelve verses to its chant and its power is weak compared to magic used by those with a falna.

Spirit Healing (精癒): Spirit Healing automatically begins regenerating Riveria's mind at a low rate after using magic. It is a rare ability, with Riveria and Ais being the only adventurers so far that have it. 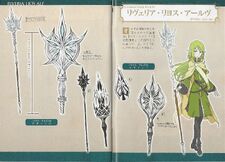 Magna Alfs (マグナ・アルヴス): Magna Alfs is Riveria's silvery white staff made from mithril and holydite that is hard enough that it can also be used as a weapon. Made by Altena after Loki ordered for it to be created, it is a first class mage weapon of very fine quality, enough to be considered one of the five best staves in the entire world. Nine magic treasure stones are embedded at the head.