Sword Oratoria Volume 12 will be released on July 12, 2019. All spoilers should be posted here. Feel free to discuss the volume in the comments below

Note: Don't read anything below the summary if you don't like spoilers 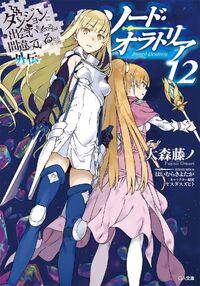 To conclude, this is a story that won't be handed down. Who won, who lost, who survived, who died, who howled, who laughed, and who wailed won't be known. There is no money or fame, and those that fall will not leave their names in history. Forgotten by everyone, they simply join the funeral procession in heaven. However, they confront it, the great evil, the extremely malicious darkness. For order, for pride, for bonds, they - the adventurers face their final decisive battle. "1000 years later, the adventurers will once again be the foundation of peace in the lower world! Bring to pass a new story!"

Add a photo to this gallery

Retrieved from "https://danmachi.fandom.com/wiki/User_blog:Angelo_Gabrini/Sword_Oratoria_Volume_12?oldid=92432"
Community content is available under CC-BY-SA unless otherwise noted.